There are problems common to many companies who need to produce quality prototypes on which to carry out functional tests.

Very often, when you enter a production process, you have to go through several steps and, in order to overcome some of them, you have to perform functional tests on prototypes that are often made by external contractors, with costs and timescales that are not always in line with budgets.

The high cost – in terms of time and money – of functional prototypes means that, very often, we end up testing one of the possible geometries, because it is economically very challenging to search for the best geometry. But there is a solution…

The printing of 3D components using high-performance polymers cuts costs and production times, especially for short runs, which are very functional in the search for the ideal solution and the best geometry.

In this sense, we could say that 3D printing sweeps away the need to choose between what is best and what is only possible, allowing us to explore a variety of solutions and avenues that were unthinkable before the advent of this technology.

Emak and the advantages of 3D printing for outdoor equipment

The enormous advantages that additive manufacturing and 3D printing processes can bring to companies in a wide variety of market sectors have not escaped Vincenzo Gagliardi, Testing Laboratory Manager at Emak, who was interviewed by us and added:

“Nowadays it is possible to create prototypes through removal and with pilot moulds: all this has, firstly, a geometric limit, and secondly, a very high cost in the case of the tool, in addition to the need to create a geometry which must include suitable drafts and undercuts.”

It is also with this in mind that Emak and 3ntr have entered into a partnership that focuses on the advantages of 3D printing and additive manufacturing.

Before explaining how 3ntr has been able to help Emak in its production processes, however, let’s get to know this brand better, whose essence – we might say – is summed up in the colour green. 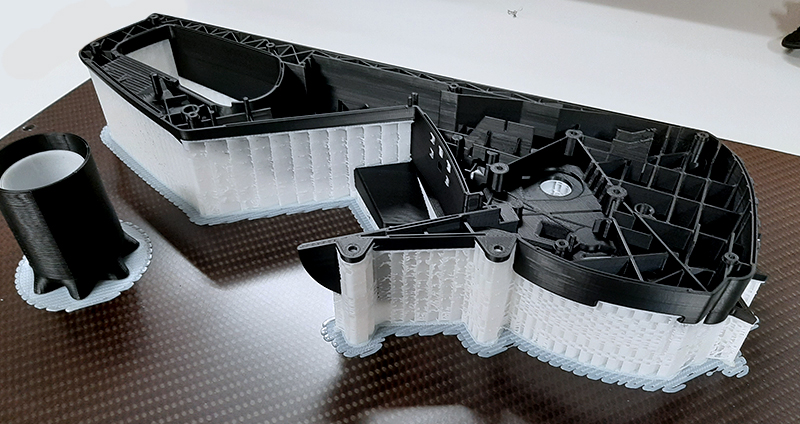 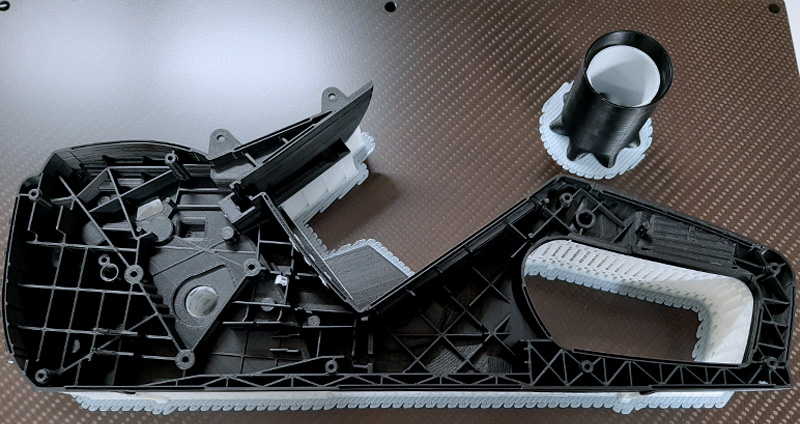 Emak: maintenance of green areas, with care and respect

Emak’s green is a green made of care and respect, passion and design. It is a kind of green in harmony with nature and characterised by state-of-the-art technology. This is why Emak S.p.A., through its Efco, Oleo-Mac, Bertolini and Nibbi brands, is a benchmark for professionals and hobbyists in all aspects of garden maintenance, with particular attention to the search for solutions capable of anticipating market choices and characterised by high functional and product quality standards.

A benchmark in technology for green area care

The Emak brand is a well-established and respected international player, a benchmark in combustion engine technology and its applications in the garden care and outdoor equipment sector.

There are over 250 models in the range, designed for every type of activity: chainsaws, grass trimmers, lawnmowers, tractors, hedge trimmers, motor hoes, walking tractors, flail mowers, transporters and much more, all designed for use at various levels of intensity, power and frequency.

As Vincenzo Gagliardi, Testing Laboratory Manager at Emak, tells us, 3D printing and additive manufacturing technology were familiar to the company. However, they had always taken into consideration parts that were already made, without ever embarking on the path of internal production of prototypes made thanks to 3D printing of polymers.

“I had only ever considered ready-made parts; I had never produced prototypes in-house,” explains Gagliardi, who adds that, thanks to an internet search and a study of the state of play of 3D printing, he came across the 3ntr brand and its range of professional 3D printers:

Emak's objectives and how they can be achieved through additive manufacturing

As we have already mentioned, Emak had clear objectives when the possibility of making 3D-printed components appeared in the company. Gagliardi tells us:

“The first objective was to shorten the time it took for functional plastic prototypes to arrive at the company as much as possible. The second objective was to be able to evaluate several solutions for the same part, without limitations due to the cost of the prototypes.”

These needs are perfectly met by the characteristics of 3D printing:

With this in mind, Emak and 3ntr worked together. Specifically, 3ntr supplied the outdoor equipment brand with its A2v4 3D printers, which, Gagliardi explains, were used as follows:

“The printer in our possession was used around the clock – except for routine maintenance – to minimise the need for external prototypes […] Both functional components and geometries useful for the aesthetic definition of the product were produced.

Vincenzo Gagliardi describes the project he carried out, the dynamics and the timeframe made possible by the introduction of 3D printing at Emak:

“The creation of a functional prototype normally involves requesting solid or sintered components from companies offering such services. After three-dimensional modelling, the process involves an external purchase request, choosing a suitable supplier, and waiting for the component to arrive at the company. In this specific case, we are talking about two half-shells designed to house the electronic and mechanical components needed to assemble a battery-powered chainsaw. By printing in-house, it was possible to assemble everything within a week, cutting the time drastically (by more than half). Not to mention the very low cost and the possibility of making several loops of prototypes to achieve the best geometry.” 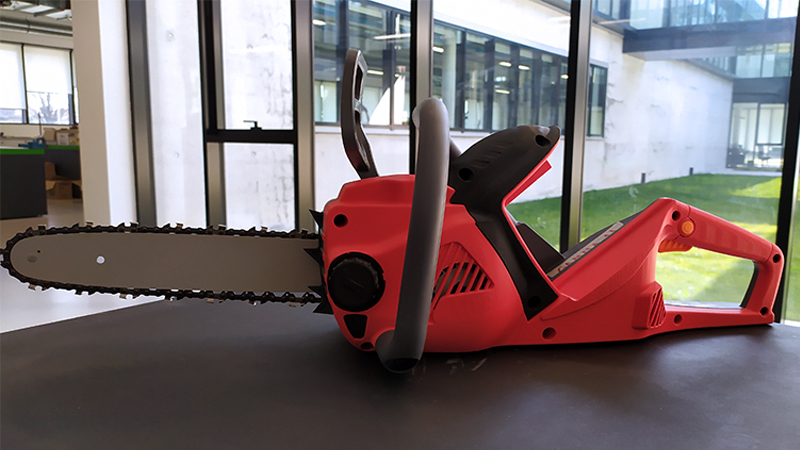 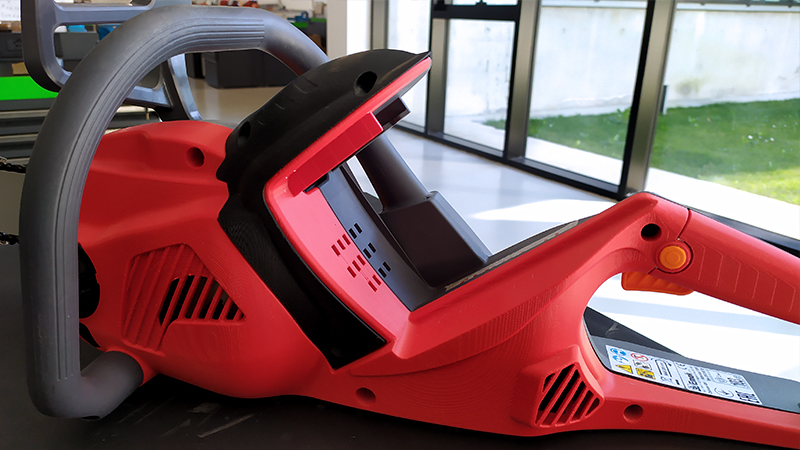 The many advantages of 3D printing for Emak

As is easy to understand, the use of additive manufacturing technology has brought a number of advantages in terms of production projection within Emak and, in particular:

Thanks to these advantages, important results have been achieved at Emak through the use of 3ntr 3D printing, says Gagliardi:

“Reduced prototype turnaround time, reduced prototype cost and in the case of the 3ntr 3D printer in our possession, the ability to print large components, covering the entire Emak product range”.

To conclude our interview, we asked Vincenzo Gagliardi if there were any new developments and projects in the pipeline, made possible by the introduction of 3D printing at Emak:

“Prototyping using 3ntr printers has paved the way for new product development,” explains Gagliardi, “and in the company we aim to make it as profitable as possible to manage everything in-house. Thanks to the introduction of 3D printing, many future projects have been re-parameterized to take full advantage of these new technologies: the intention is to increase the use of 3D as much as possible and to bring in other company departments as well“.

Today, at Emak, the A2v4 printers are in operation 24 hours a day, transforming ABS, Glass, Carbon, Elastomer into fundamental components for the creation of those tools that, every day, help green care professionals all over the world.

And this is only the beginning.