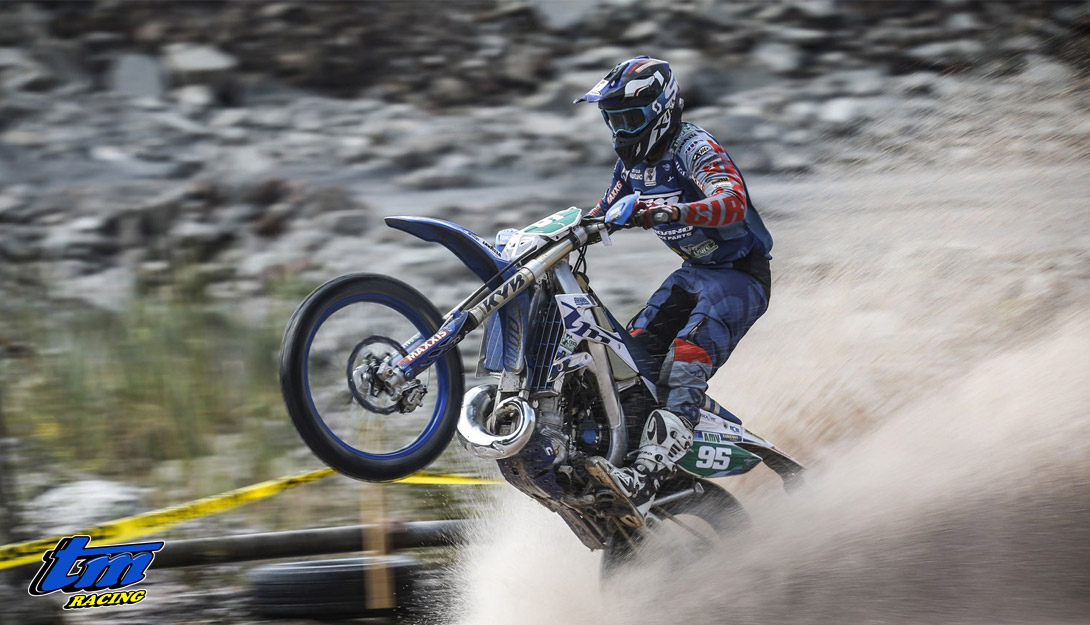 TM: There is a lot of history enclosed in these two letters. A story with a romantic taste, which has its roots in years in which auto-motorcycle production was a frontier explored only by courageous and visionary people.

Behind T and M there are two friends and their great passion for motorcycles and racing: Claudio Flenghi and Francesco Battistelli (who chose their children’s initials to give their business project its name). Like all stories that begin with a friendship, even the story of TM is capable of moving and vibrating the deepest strings of our hearts, just as the engines that vibrate and roar and still today carry this brand imprinted in the metal.

TM Racing – a company that is a mythical name for motorcycle and motorcycle racing enthusiasts – has distinguished itself over the years for its extreme care in design choices and in the selection of materials.

We like to think that it was their constant search for excellence that led them, one day, to meet 3ntr and want to introduce additive manufacturing and 3D printing technologies into the company. We talked about it with Lorenzo Grieco, designer of TM Racing.

3D printing of motorcycle components in ABS and Elasto

«We had been using some 3D printing systems in the company for a while. We had a “home” printer. Then, visiting MECSPE – a fair dedicated to the manufacturing industry – we discovered the 3ntr brand and their offer of professional 3D printers, which immediately seemed very suitable for our needs. In particular for the production of parts in rigid and semi-rigid plastic polymers. Now in the company we use an A2V4 printer, with which we print in ABS and Elasto 95».

The advantages of 3D printing in the company

3D printing certainly brings great benefits to a company like TM Racing. There is someone who derive from the choice to internalize the prototyping and production processes, but also anecdotes that tell of how 3D printing can help overcome unexpected obstacles.

Being able to count on a professional 3D printer – easy to configure and use – installed directly in the company, TM Racing was able to start making prototypes and components internally. So, it has reduced its dependence on external companies and suppliers third parties and, of course, has also lowered management and production times and, consequently, also the related costs.

«Thanks to the A2V4 today we print pieces to be able to touch them with hand. To have the “real” components in front of your eyes, and not the 3D drawings which, when viewed on the monitor, often don’t really convey the idea of ​​what the finished product will be. – Explains Grieco, who adds – We really make everything in the company: from the crankcase to the pistons, not to mention all the aesthetic parts of the bike, such as fairings, mudguards and so on … ».

It seems clear, therefore, that 3D printing isn’t a mere commodity, but an important element within the production department.

«To make you understand how important 3D prints have become in TM Racing, I’ll tell you about the last episode in which these proved essential! Last month we had to present the new my 2022 bikes to the press. Unfortunately, however, some external and internal plastics weren’t ready, due to some delays in the realization of the molds. So, we resorted to 3D printers in order to prototype the missing parts! And the presentation was a success! ».

A story that highlights two fundamental characteristics of the professional 3D printers proposed by 3ntr: production speed and reliability.

«What we really wanted was a 3D printer that could print a large number of pieces, guaranteeing us speed and reliability. And the A2V4, compared to the FDM 3D printer we used before, is certainly more stable in operation and guarantees excellent repeatability, producing pieces that are almost identical to each other, with very few geometric discrepancies or imperfections in the material! – Grieco concludes – Sometimes 3D printing has also avoided errors. In fact, being able to see the printed pieces, we noticed small imperfections that, looking at the 3D model on the monitor, we had missed ».

In short, 3D printing is a further and concrete step towards improvement. Especially for companies like TM Racing which – as you can read on their website – are almost “obsessive” in the attention to detail and in the choice of materials to make the motorcycles or, as they call them, their “jewels”.

Someday, this story could be your story. Contact us to discover our professional solutions for 3D Printing . With the help of our consultants we will find new solutions for your design and production .

Give your business new strength with 3ntr 3D printers .